On the changeableness of autumn 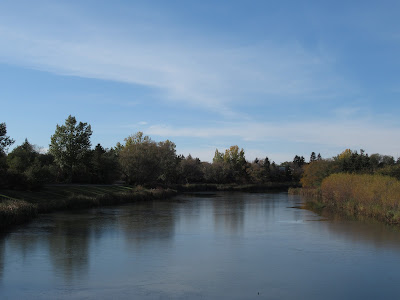 I can't quite pinpoint the moment when I think fall has truly arrived.  It has something to do with the beginning of the school year, and with the fact that for sixty-four years of my life change was always in the offing in September.  For me, the beginning of the school year is perhaps even more of a new year than the new year.  On January first, there's this collective search for our better selves--thinner, more fit, less materialistic, more sober, more (or less) sociable, less driven by the online world or more eager to try out a new online-identity--or whatever falls into those goals that we embrace so eagerly until about the first week in February, when the cold and grey have defeated our optimism.  In September, I was often forced to be different:  new classes, new students, new committees.  I welcomed the first two, not so much the last.

I still remember quite vividly coming back from my first sabbatical in 1998.  I did indeed have a new class:  Martin Bergbush couldn't teach the course on Thomas Hardy that had been assigned to him, and since I'd written about Hardy, it was given to me.  I spent the summer immersed in Hardy's less-than-cheerful worldview that didn't seem as foreign to me then as it does now.  (That might be a topic for another blog.)  I don't know whether it was Hardy, or some mistaken idea that it was time for me to be truly professional in the classroom, but I decided to teach without the whimsical--and sometimes silly--and hopefully witty approach I usually brought to the classroom.  I had had a sabbatical, finished a novel, and I was Grown Up.

I lasted about a week.  And it turns out there's very good reason I recanted:  people learn  more when there's some laughter--something about flooding the brain with oxygen and lessening stress.  I don't know whether this anecdote proves or refutes my point.  I was ready for change, but also ready to abandon change when it didn't work.  A radical openness--perhaps that's what fall brings.  When I'm driving around in a green and gold world, listening to the  "unching of the leaves" (Bill's expression) beneath my feet or watching leaves fly by my car windows as I go about errands, my mind turns to what-ifs.

What if I moved house--someplace smaller in Regina, or maybe to Denmark? (I've been reading about hygge for an essay on minimalism I'm writing, and have learned how happy the Danes are, in spite of the weather.  They regularly win prizes for being the happiest nation on earth.) What if I let my hair grow?  What if I could actually lose those ten pounds, supported by my delight in newness?  What if I gave in and started new writing projects without finishing those I was working on and frustrated by? (Chaos and disappointment.  I prefer to finish things--or let's say I'm learning to prefer to finish things, particularly quilts.  Bill's birthday quilt is nearly finished.)  So change infuses my mindset in autumn, often in playful, unrealistic ways, but that's okay.  In an odd way, all this whimsy makes me feel young.  I can still play what-if.

And then I walked into our bedroom, which has a striking blue and cream/tan/white quilt on the bed, with autumn's golden light coming in from the west, and all I wanted to do was hunker down and make quilts.  Forget this writing stuff:  do what seems simple to me, what I struggle, in my post-retirement busyness, to get to.  What gives me joy at the smallest levels.  It's really hard to get excited over a stanza, because you don't really know if it's any good until you have the whole it belongs to, and you really don't know whether a poem is any good.  But I can get excited about a block. I know whether the patterns and the colours sing, and I'm pretty good at getting other blocks to sing in harmony.  I want to hunker down and make bread--the white bread of my mother's post-rationing recipe.  (We don't eat white bread any longer, though I have a hybrid/hy-bread that combines oats and whole wheat flour with the milk and butter of my mother's recipe.)  I want to make soup and knit socks.  I want to cleave to time and home and autumn light. 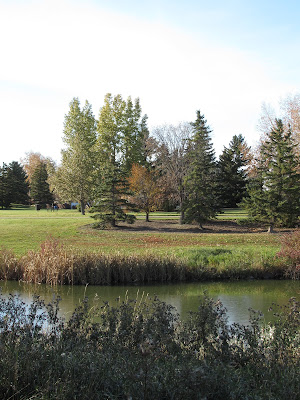 Cats change their behaviour in autumn.  In the summer, they're more independent, they sleep less and spend more time watching birds in the trees outside our upper-storey windows.They sleep downstairs, where it's cooler.  In autumn, they rediscover how much they love you:  Tuck has taken to sleeping on my pillow, and Lyra regularly snuggles the back of his head in the crook of my arm as if he were my baby.  Their purrs are ecstatic and they talk to me more.

But there's also a kind of violence to autumn.  You need to remember that I'm of the generation that read The Secret Life of Plants, and though the authors were a bit careless about the methodology they used to "scientifically" prove that plants have an awareness of their surroundings, more careful research by people like Peter Wohlleben has proven them right.  One September Sunday morning, before I pulled up the carrots and the sweet peas that never really bloomed, I decided to take out the bush beans and the pole beans that weren't really producing any longer.  The pole beans made it incredibly hard:  I had to rip the plants out of the ground and off the trellises that were supporting them.  I felt vaguely like a vegetable murderer and wondered if the carrots would ever forgive me.  They did.

At the same time, there's something magical and beautiful about senescence, about the mysterious process we barely understand, by which a tree returns the energy stored up in its leaves to the roots, where it is sequestered in the winter, to be pumped back into the leaves in spring--a process we really don't understand.  There's something vaguely plangent in the way trees turn their seasonal collapse into beauty.  It's a submission I'd like to emulate. 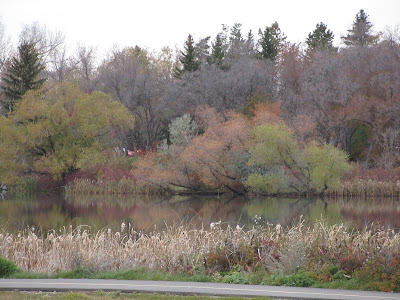 But I can also tell the trees from the forest, given that each species of tree does its autumnal change differently.  The willows and Russian olives remain stubbornly grey-green.  The ash trees go suddenly golden, and then just as swiftly drop their leaves.  The elms seem to do senescence differently every year.  One year they'll go golden and hold that goldeness.  Another year, they'll drop their green leaves at the sign of the first snow.  This year, in spite of early snow, they are turning bronzy-brown and holding onto most of their leaves.  One of my favourite red lights is at Wascana Parkway and the road into Conexus Arts Centre:  there you can see across the lake the startling differences between the trees.

The sun changes weekly, partly because the west side of my back yard is a small forest; as the leaves fall, my yard is flooded with sunlight.  The birds in my back yard usually flutter from tree to tree--looking for food or a better view--but in the fall they shoot through the yard like arrows intent on a target, and I wonder what they are seeking.  Even looking out on my half-denuded trees as I sit in front of my SAD light is a gift:  the sun's southwards track lights up something different each week.  Last week it lit up my lemony-lace elderberry for the first time; this week it projects shadows of bare trees like lace on the wall rather than full branches of leaves. I am taken in by the beauty and yet pervaded by a sense of resignation.

A change of perspective.  That is autumn's gift:  birds, leaves, colour, shadows and light, all urging me to see differently.
at 10:31 AM