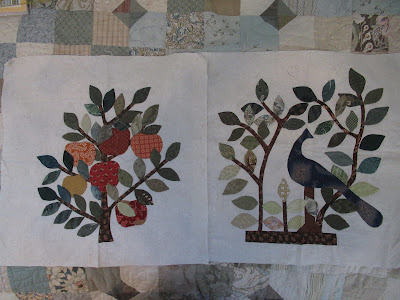 Over the holidays, I had a long, rich conversation with my sister Karen, who lives in Atlanta Georgia and who is experiencing grief at the loss of democracy that is so much written about in the more thoughtful media these days.  Such grief is real; there is worldwide evidence that democracy is under challenge, if not by dictators then by social media that is willing to propagate lies under the banner of free speech.  If you don't have access to facts, how can you possibly exercise your democratic rights?  That, and Americans' challenges to voting rights, is a question for another day.  In order to distract her momentarily, I asked if she had any New Year's resolutions.  The scoffed.  I said I did, but that I didn't really want to talk about it.  But her skepticism prompted me to tell three interlinking stories.

Over the past ten years or so, I've experienced three of those "When the student is ready, the teacher will appear" moments.  They were interesting teachers though:  an article in Oprah, an aging cat, and a line in a bank that refused to budge--followed by a kitten.

When Bill and I were getting to know one another, he regularly bought Oprah in the same spirit that he went to quilt shows with me:  he knew there were secrets women kept and he wanted to learn from them.  An article in Oprah written by a highly respected business woman (and I'm sorry; I don't know her name) wrote about the frustration she felt when she wasn't in control.  (Welcome to my life in academia, I thought.)  She told a story about being late, getting caught in traffic, only to have the woman in front of her ignore a green light to get out of her car and look in the back seat.  The author got out of her own car, marched over intending to offer a piece of her mind, only to see that a baby was in the back seat, choking.  The take-away?  "Just be curious."

It's easy enough in your fifties to believe you have the experience and the wisdom to know what's really going on, especially if you are ordinarily an astute observer.  It may even seem to be time-saving to jump to conclusions, to leap to judgement, and just get on with things.  But particularly in my role as professor and Graduate Coordinator, I found that asking the simple question "What's up?" when a student was in trouble or behaving oddly was ever so much more efficient.  We dealt with what was real, not with my hasty conclusions.  It was in that role that I got to practice "just be curious," but what I learned there barely scratched the surface.  Having a fight with someone you love?  Stop and be curious.  Bored, with that deep existential boredom that threatens your equilibrium?  Just be curious.  I later learned (and again, this is a source I can't find, though I've tried) that Alice Munro has said that "Curiosity is the only guarantee of happiness."  And I think she's right.  Life will change profoundly; that period of my life marks the death of both my parents.  But if one is engaged in the world by being curious, the loss can be managed.  Indeed, just being curious about the way you are experiencing the loss is probably the most likely route to understanding how you feel--and the only "closure" you'll ever really get.  Remember to be a child again, to revel in a child's curiosity about everything.  You can find  joy on the greyest and coldest of days by being curious. 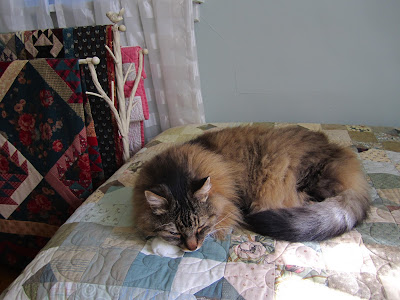 Twig was my second teacher.  He tried teaching me to be grateful in his early days with us.  His story is, briefly, this.  My friend Deborah Morrison boarded a horse near the airport where she rottweiler was killing the barn cat's kittens.  She decided to go back and cat-nab Twig, whom she found curled up on the back of her horse, and brought him to me.  I had two cats already, about a year or two old,and they thought bringing up Twig was a chance to be a kitten again.  But before Twig settled in, he would take a bite of his food and quickly swivel his head both ways; he still felt under threat.  At the same time, he was one of those unusually cuddly kittens, perhaps because he was grateful to have fetched up with us.  In 2003, when I broke my ankle and had to put no weight on it for several weeks before I could have a walking cast, Twig came to bed and stayed.  He left for meals but otherwise he was my familiar, and indeed turned out to be one of the best nursemaids I ever had.

I thought his faithfulness was beautiful but didn't give it much thought until he was about sixteen and had the first of two horrific bouts of pancreatitis that allowed me to see how much I counted on his presence.  After we made our way through the first one, I started a new bedtime ritual.  After turning down the heat and turning off the lights, I'd bend down to put my forehead against his and tell him how grateful I was for another day with him.  It got so that he was purring even before my mouth grazed his ear.  Then when we lost Sheba--a heart-rending three months of mysterious ill-health that ended with her sitting with her face to the wall, untouchable--he began sleeping in her spot, in the curve of my belly.  He could have done that months before when she stopped sleeping with me, but waited.  What was going on in that cat's mind?  I'm grateful for those mysteries.  I'm grateful for a cat who lived a passionate part of his inner life in my lap and in that way shared his inner life with me.  I'm grateful for the many teachers I've had.  I'm grateful, at nearly seventy, for each and every day, every moment with the people I love.  Pushing seventy--subject for another blog post--you find everything more precious.  It's painful sometimes, ringed round with sundogs of grief, but mostly it's a prompt to celebrate.

There's robust research indicating that gratitude is good for us, and publishers have profited off that by creating gratitude journals for us while self-help experts suggest making lists of something we're grateful for on a daily basis.  But I find there's a often a barrier between what I know is good for me and what I actually feel or can commit to on a daily basis.  But the deeply felt ritual of telling Twig every night how grateful I was lodged gratitude in my being.

I learned my third lesson in a bank line-up.  After Veronica and I launched Visible Cities, we had quite a bit of cash on hand, and a good handful of toonies and loonies, so I actually got in line for a bank teller rather than doing my banking at an atm.  There was only one person in line in front of me; ever mindful of time, I thought this wouldn't take too long.  But ten minutes later, the line hadn't budged.  First I obeyed my first rule:  just be curious.  I eavesdropped, which was easy to do in a quiet bank.  One of the patrons being helped needed to understand his bank statement:  why did anything bought after the middle of one month not get paid for until the end of the next month?  He was an older man, perhaps used to a tighter economy, and this simply baffled him.  The other patron had brought a friend to translate for him:  he was clearly a newcomer trying to set up bank accounts.  And I thought to myself, "Yup.  Those are the people who need the help of bank tellers."  But I also wondered whether the people who get anxious and then angry when a line doesn't move and who begin to get noisy actually get what they want?  Could any amount of complaint or shouting move any of these processes along?  Whereas what I wanted was....  I thought for a minute.  Serenity.  That was what I wanted.  I struck up a conversation with the women in front of me and looked out the bank windows at people hurrying by on the street.

So when I told Karen I had an odd new year's resolution it was simply this:  I want to study patience.  I want to understand patience.  I want to see it as a positive choice not negative restraint.  For when we say that someone is patient, we often reference their restraint.  We can see them biting their tongue and rolling their eyes.  But I've found patience is one of the paths to serenity. Being patient while Lyra slowly eats his breakfast is the only useful strategy.  Do anything else, try to multi-task while the damn cat plays with his food only means that Tuck will shoulder his way into Lyra's bowl and I'll end up hollering at Tuck and where is the serenity in that?  In fact, Tuck was one of my early teachers of patience.  He earned his name in his early days here when he tucked himself in the most unpredictable places in order to feel safe.  But, I remember thinking to myself then, I have wily patience.  I can find exactly the right toy to dangle in front of his hiding place and show him that playing is more fun than hiding.  Wily patience often gives you a chance to be pleased with yourself and an opportunity to just be curious and use what you have learned.

There is also curious patience.  Bill taught me that.  We had a holiday after our first year together and went down to The Cypress Hills.  Now I need to say that being on vacation with my dad, and later my first husband, was a tightly scheduled affair:  we had to make time.  But when I saw a sunset I wanted to photograph, imagine my surprise when Bill simply drove off the road and was willing to wait as long as it took for me to get the photo I wanted.  He is almost always patient--if he's ready to go somewhere before I am, he doesn't stand and jingle the change in his pocket and whistle impatiently like my dad did.  The patience we have with children is often curious patience.  Maybe that's why I often patiently hang around while Veronica takes a photograph.  I'm never, ever bored.  I find it's a chance to stop and take a closer look, to see the world more carefully, even to wonder what inner vision of hers prompts this careful process.  I get a chance to see what she sees.

There is also the patience of craftsmanship, which I experience vicariously while Veronica takes a photograph, the willingness to take whatever time necessary to make a photograph or a quilt or a piece of beading or a poem flourish.  In fact, this kind of patience actually moves outside time:  the artist is alone with the work in a bubble of inspiration and patience.  I made a new Christmas tree skirt this year, and I had four applique panels that had 16 leaves each.  And they were narrow leaves, not easy at all to applique, and I had a deadline, but they were a chance to learn something.  Why did they sometimes come out beautifully where others seemed off-centre, their points not at all pointy?  (Just be curious.)  But when I was done, could I applique a leaf!  And now I find more pleasure in my applique.

There are other kinds of patience, and I'll be looking for them this year.  And other settings.  I think it's easier to be patient when you're well-rested or when you're in a calm environment rather than standing among an anxious mess.  Perhaps you'll help by telling me your story about being patient.  You've got one.  I know it.