Hope as a horizon 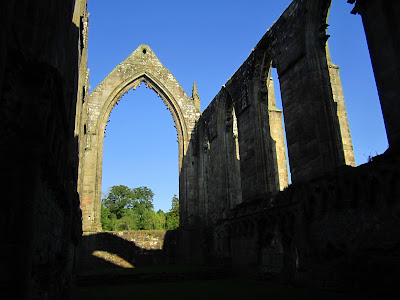 For twenty-four years--between the ages of sixteen and forty--I struggled with depression, experiencing two or three eight-week episodes a year.  Because they were so brief--I'm a "rapid cycler"--who knew?--antidepressants weren't an option.  I had some helpful rules.  I didn't drink.  I didn't make judgments of people, I set myself a task to complete each day and completed it, whether I wanted to or not, just to show I could.  I had regular appointments with a fabulous psychiatrist.  These were all simple things I could do to make sure I didn't make my life, or anyone else's, worse.  The episodes stopped suddenly when I moved to Regina, and I have often said the city must put something in the water.

But they came back this spring, though not in their old form.  I will have a couple of days every week where I am--let me count the ways--blue, exhausted, feeling hopeless.  Depressed.  I just want to go back to bed and find a nice, big, soothing book to read for the next forty-eight hours, preferably with cats for company.  Unfortunately, Lyra and Tuck are still young and a whole day in bed with me is right out, though that's a good thing.  As they go on living their playful lives, my blue self is dragged into their world briefly.  I still work in the garden, though not nearly often enough and not joyfully this year, which is too bad, because researchers say that there are microbes in the soil that lift our moods.  Walks remain helpful though:  eventually something will catch my attention and I will be lifted outside myself for a little while.  When I have been able to make myself accomplish something, I am surprised to see that the writing is going okay--which is all one expects from a draft.

Depression falls into two general categories.  One is endogenous depression, for which you can find no obvious stressors.  Something in your biochemistry has gone walkabout.  You can't identify any causes, so there is nothing you can fix.  You simply endure.  When you are experiencing the second kind, reactive depression, you can identify a cause.  A breakup, a death, a failure.  If you are lucky and have a a good companion on your journey, these depressive episodes can ironically be an opportunity to learn something about yourself, something about being human.

Throughout my life, I've been a rather disciplined depressive.  When Forbes posts its "Twelve habits of happy people," I get a hit of affirmation because I do all twelve.  As a postmodern Pollyanna and an experienced depressive, I am so aware of making choices.  So my opportunity during these months is to be reminded of how powerless we are in the face of our psychic demons.   I needed to remember that we sometimes wake up in a mood today--and for an unknown series of days--wearing a pair of glasses that distort how we see the world, a pair of glasses we simply can't take off, although we know they are wrong.  We see the whole world through this mood and there is little that discipline and choice can do--though at least they can help us not to make it worse. 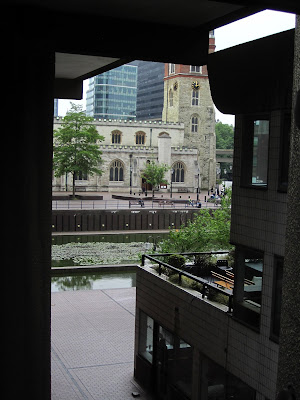 I can only think of one external stressor right now: Donald Trump.  That man has managed to suck so much joy and hope and opportunity and conversation and cooperation and love and safety right out of the air we breathe.  If he were Smaug, he'd be breathing stupidity and selfishness and greed and sheer angry delight in destruction with every flame coming out of his mouth.  I've noted  elsewhere in this blog that for a week after he was elected I did no writing.  I got nothing done.  I wallowed.  And I didn't even know then how bad it could get.  It's those children taken from their parents that have gotten under my skin, and the knowledge that this experience is rewiring their vulnerable brains, and not for the better, changing them forever.

So I have continued to read Rebecca Solnit's Hope in the Dark, and I find that she has good advice for depressives, activists, and creative people.  In a later chapter wonderfully titled "Getting the Hell Out of Paradise," she talks about the impatience of activists who believe that they have failed because they have not created utopia.  She quotes Uruguayan journalist Edouardo Galeano, who views utopia as a horizon, not an end point:  "When I walk two steps, it takes two steps back.  I walk ten steps and it is ten steps further away.  What is utopia for?  It is for this, for walking" (113).  As long as we are human, there are going to be things that we need to change about ourselves and our institutions, so we had better not lose the habit of taking stock of our lives and societies and figuring out what we need to change.

Solnit has noticed a trend in activism, a trend away from activists' adherence to a rigid set of principles and toward cooperation and non-hierarchical structures for setting goals and making decisions.  Her book was written in 2005, but the trends she notes were certainly at the forefront of Occupy Wall Street in 2011.  Activists in 2005 were aware that they were on the wrong track if they expected their revolutions were going to result in a change in institutional power--largely because institutional power is itself already problematic.  Instead, John Jordan argues, activists need to "walk away from power and find freedom.  Giving people back their creative agency, reactivating their potential for a direct intervention into the world is at the heart of the process....In that moment of creation, the need for certainty is subsumed by the joy of doing, and the doing is filled with meaning"  137).  In this context, Solnit concludes that "the purpose of activism and art, or at least of mine, is to make a world in which people are producers of meaning, not consumers" (148).

Solnit and Jordan are envisioning a world where everything we do--from a kind word for an overwhelmed barista to a poem--matters.  And creativity and kindness matter in Trumptime even more than when Bush was president.  These simple acts keep a certain collegial way of living and a subversive way of thinking alive--for poetry is always subversive, isn't it?  Even the way poetry thinks is subversive.  Similarly, when we are depressed, these are things we can manage--perhaps barely--but we can.  To come out from under my blue fug and say something kind to someone else is wonderfully empowering, an antidoteto depression that is perhaps more useful than any drug.  Two lines of poetry that come out of an hour's desperate thinking are not only two lines, but a way of thought.

Whether you are feeling depressed, or have writer's block, or have simply heard Trump lie too many times or act on "principles" that make no sense, Solnit's closing ideas are helpful:  "I believe in hope as an act of defiance, or rather as the foundation for an ongoing series of acts of defiance, those acts necessary to bring about some of what we hope for while we live by principle in the meantime.  There is no alternative, except surrender" (163). 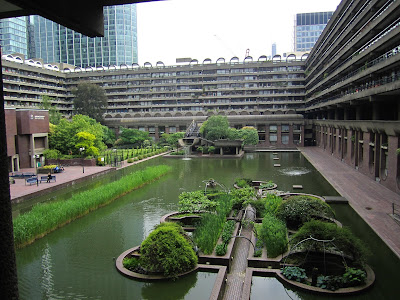 As for my depression--which probably felt like "too much information" at times--today is a good day.  But I have always felt it was important to talk about my own struggles with mental health to make it seem less foreign to those who don't struggle and to offer a hand to those who do.  On my walk today along the bank of Wascana Creek,  I saw a rare pelican, floating with its awesome grace along the currents.  And then when I got closer, it began to beat its enormous swings slowly, slowly, first against water and then against air until it slowly, slowly rose, and began to soar on the wind.


(The first photograph is from Bolton Abbey in Yorkshire.  The second two are from the Barbican Centre.  You want an image of hope?  There's a great blue heron at the other end of the reflecting pool.)
at 12:42 PM