Plagued by Pandemic Boredom? Slow down. 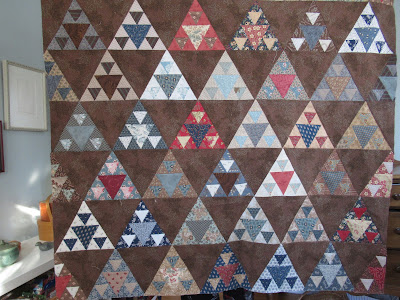 Last Sunday, Bill came upstairs where I was at work on finishing the quilt above and said--delighted--"You were singing!?"  Indeed, I was.  Singing an old Simon & Garfunkle song:
Slow down, you move too fast
You got to make the morning last
Just kicking down the cobblestones
Looking for fun and feeling groovy
Ba da-da da-da da-da, feeling groovy
I got no deeds to do, no promises to keep
I'm dappled and drowsy and ready to sleep
Let the morningtime drop all its petals on me
Life, I love you, all is groovy
Putting this quilt together has been a challenge.  There are all these little points that need to come right to the edge of a block.  Sometime I was joining six points together.  I've watched people put together quilts and just slap their setting blocks (the brown) on top of the pieced blocks and go with whatever comes out, trimming here and there as needed.  And I could probably have done that about half the time.  But the other half of the time, if I want those blocks to sing with the care I'd given them, from choosing the fabric to the initial piecing, I needed to pin them carefully.  As well, blocks like this create many "ears," extra little bits of seam that stick out from the blocks, that keep the whole quilt from lying nicely when it's quilted.  So I was taking time.  I was pinning each block and then checking as soon as the seam was sewn that the points were pointy.  I was trimming ears and threads that might show through when it is quilted.  I was ironing each row of blocks in a way that would make putting the rows together yield more neat little points.  I'm certain that my mood was boosted by the sunshine, but really, taking care cheered me up no end, prompting me to...well, I won't call it singing.  My voice has lost its flexibility.  But I was warbling happily. 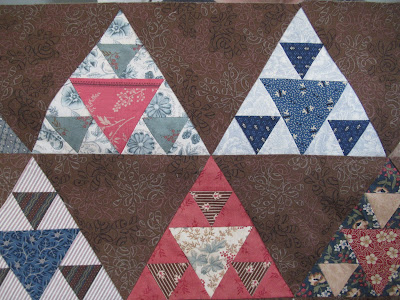 One of the things I did this Christmas to add something to our holidays in the face of all that was subtracted was to buy both Veronica and Bill gifts we would share.  So I went to Indigo, sanitized my hands, trolled the cookbook shelves, and came back with Ottolenghi Simple, a cookbook Veronica and I are sharing, reading together and talking about.  Veronica has noted that "simple" has many meanings in this cookbook.  It's not necessarily that there isn't a lengthy list of ingredients.  And the dishes aren't necessarily fast, though some of them certainly are.  She observed that mostly it's stress free.  The instructions are precise:  saute this for eight minutes while you cut that up.  There's a clear progress to making the eggplant with bulgar and yogurt.  And if you know you have eight minutes while the eggplant is roasting, you can use some of that time to clean up the kitchen.
I've noticed a change in how I make meals as the pandemic goes on.  I used to be able to multi-task.  I'd head and tail fresh green beans while I watched (and listened to) sauteeing chicken breasts and waited for the brown rice to come to a boil before I put the lid on.  I can't do that any more.  I simply give myself an hour to make a meal.  I am my own "entremetier," according to kitchen  hierarchy.  I'm likely to begin meal prep by pulling everything from the fridge that needs to be cut up, getting out my large cutting board and my little white dishes, and chopping parsley or ginger, cutting up vegetables for a salad, then, at the end, doing whatever needs to be done with the meat before I cook it.  Yes, this takes more time, but I'm more relaxed when I sit down to eat the meal.  In the face of a pandemic and the brain fog that sometimes rolls in of an evening, I'm not sure multi-tasking is all it's cracked up to be.
So much of life is a process.  Building a relationship.  Raising kids.  Writing a poem or a novel.  Learning to play the piano.  Gardening.  Becoming, daily, stronger and more human--more empathetic, more curious, more patient, more yourself.  Understanding this complex and boggling world that we are living in right now.  Understanding our societies and our cultures.  Most of the things that are truly important take time.  Most of the important things that take time can't be rushed.  And why would you want to, if things seem to be unfolding as they should?  It would be like pushing the river or pushing string. It would be short-circuiting the spirit of discovery, making its nerves jangle.
In fact, in 2009, economist A.B. Krueger edited Measuring the Subjective Well-Being of Nations:  National Accounts of Time Use and Well-Being.  The economists he worked with--Krueger was considered one of the world's fifty most influential economists, and Daniel Kahneman has won the Nobel Prize for Economics--concluded that money is not the real currency of our lives.  It's time.  It's how we spend our time.
The pandemic has shifted that.  An article in last week's Globe and Mail indicates that we're commuting less and spending much more time at home with our families.  We're watching TV or Netflix.  Not surprisingly, we're spending more time caring for children, often at the expense of caring for ourselves or keeping our jobs.  But there are also some signs that the pandemic has had some positive effects on our use of time.  We're spending more time outdoors, often with our families.  We're spending less time in traffic jams--which make us profoundly unhappy--and it's unclear whether we're willing to go back to the pre-pandemic status quo.
Quilting asks all kinds of questions about how you spend time.  There's my patient but delighted construction of the quilt top.  Then, I could drive to Moose Jaw and take the quilt top to Shelley at Half Yard Quilting Studio, and we could pick an overall design for the quilt--rows of twining leaves, for example, and then I could drive back a week later and pick it up. Shelley does beautiful work.  Or I can baste it up myself and spend several months quilting with a pattern that's attuned to its design it while I listen to music or an audiobook or simply daydream.  Hand quilting is a lovely invitation to daydream, even while it connects me to the past, to all the women whose only option was to hand quilt their own quilts or organize a quilting bee--a wonderful use of time!
Annie Dillard, whose wisdom is seldom questioned, has said that "How we spend our days is how we spend our lives."  I suspect she's right.  Even the economists--those practitioners of 'the dismal science' --think so.