COVID exhaustion and our best selves 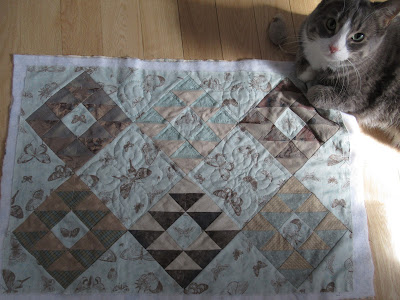 Like you, I'm exhausted.  I have lived a very privileged pandemic, not having to worry about unemployment or buying groceries or paying the rent or catching COVID while working on the front lines or from living in a crowded apartment.  But I'm still exhausted.  It hits me when I'm going upstairs sometime after dinner and I feel as if I have to extract each leg from a pool of molasses before I can go one more step.  I'm exhausted by anger and grief.  I thought getting my first dose of the Phizer vaccine would ameliorate that feeling, but it's not myself I'm worried about.

I've tried a variety of ways to work around these feelings.  When I was overwhelmed by the idea that at least four people--though apparently it's closer to nine--would mourn each COVID death, I'd try not watching news for a couple of days.  Then some premier would change the public health orders and I'd be hopeful until I found that the changes weren't the one the scientists were telling leaders to make.  Or other premiers refused to change orders because people weren't following the ones that were in place.  It's called "leadership," guys.  You find ways to convince your base (pun intended) that for the next little while it's in everyone's interests to worry about other people and mask up because that's how we get out of this. You remind them that they're good people and that, really, they care about the safety of other people.

Then the third wave hit India and parks became crematoria and people were buying canisters of oxygen on the black market for $500.  That there even is a black market in oxygen says something crucial about the breakdown of the feeling that we're all together in this.  The only important thing is to profit from the situation. Anger and grief came streaming back, screaming back.  How is the world ever to "recover" from such an assault on our well being and on our sense of community?  Will we hold politicians who refused to lead responsible not only for death tolls but for grief tolls?  How will we recover from such collective grief--except, perhaps to say that my grief for those dying in India reminds me viscerally that we're all connected.

Then I'd sit down and give myself a stern talking to.  Because this is going to go on for a while and I have a responsibility to the people close to me. I'd remind myself that for every privateer selling oxygen on the black market there are a couple of guys in a basement somewhere trying to help people find appointments for a vaccine.  For every bumbling politician there are whole armies of doctors and nurses who have made it their medical and ethical responsibility to do the best for each patient in their care.  I'd think about how much careful planning has gone into vaccine clinics and how much empathy went into thinking through how people move through each step.

Please remember, I told myself, that human beings are primed to look for danger:  there's an evolutionary advantage in that practice and now we know why.  But danger isn't actually everywhere.  The Nobel Prizewinning economist, Daniel Kahneman, identified a troubling human thought pattern that he called "the availability heuristic."  If someone asks you if X is common, you'll say it is if you can quickly think of examples.  If a sense of threat is already colouring your perceptions and someone asks you if anti-maskers or anti-vaxxers are common and you can quickly think of an example, you'll say yes.  But please, I told myself, before you think about those dratted anti-vaxxers, see if you can't also find memory footage of lines and lines of people calmly and excitedly waiting for their vaccine.

Also, please remember that news media are well aware that if they can make you fearful it will be good for their popularity and  advertisers like that.  So, I told myself, pay special attention to the "Reasons to Be Cheerful" email that comes on Wednesday and the "Future Crunch" newsletter that comes on Friday.  Share them with someone so you remember what was good about the world.  For example, Wednesday's Reasons to Be Cheerful reported that wheat farmers in Washington State are selling their hay to a company that will make paper out of it--protecting the state's wonderful forests.  Today's Future Crunch told me that conservationists have purchased a 950 square kilometer corridor of rain forest in Central America to save the ocelots and pumas, the howler monkeys and spider monkeys and countless bird species.  That, beginning in May of 2019 and continuing for 589 days, twenty-year-old Edgar McGregor walked the Eaton Canyon near Los Angeles and removed 7000 kilograms of trash.  He documented his effort on Twitter and inspired other people to undertake their own efforts.  This has let McGregor see the interconnections between the differences individuals make and the changes our culture will undertake.  That's big.  Keep recycling and plant your garden.

This would work for a while until numbers would go up at dizzying rates that seemed almost impossible.  Then I would ask myself a fruitless question:  "What does this virus want of us?"

Of course, the virus doesn't want anything except a host.  Not in a physical way, anyway.  But maybe it does want something from us in a more existential way.  It wants us to be our best selves.  To exercise restraint and follow public health orders even if you badly need a hug from your best friend.  If the temptation gets too great, think of doctors having to decide who gets lifesaving treatment and who doesn't.  If you don't want to make that same decision, forego the hug for a couple months more.  You've made it this far.  Spoil yourself and find ways to be resilient so you can keep up your spirits and help others keep theirs up when the going gets tough.  To be kind. To be grateful to all those people on the front lines who are terrified of taking COVID back to their families.

But is humankind really this good?

So I sat down with Rutger Bregman's wonderful book, Humankind.  Bregman is a Dutch historian with serious research chops.  He discovered that the scenario William Golding created in Lord of the Flies didn't play out when six young men were alone on an island for fifteen months.  They cooperated.  They made rules.  If there's a conflict, each of you go to opposite ends of the island and don't come back until you've calmed down. Bregman found that most subjects in Stanley Milgram's experiment thought the whole thing was a set-up.  We're really not willing to administer an electric shock to someone who is screaming in the next room.  He told us that in Britain during the Blitz the English kept their spirits up and helped those who had lost everything.

So yes, you are really this good.  We really are this good.  Have some tea and do something calming.  (Working on Veronica's birthday present, above, has been a lifesaver.)

Put your mask on and smile with your eyes.

And check out these resources:

Here's the link to Future Crunch

Here's the link to Reasons to be Cheerful