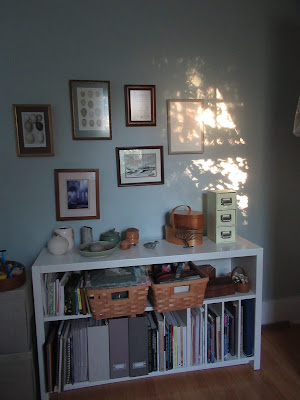 I've been wondering whether being 71 is changing my emotional relationship with time.  Even writing those words--"my emotional relationship with time" would have been unthinkable a decade ago.  I either had enough time to get things done, in which case I was calm and in the moment. Or I didn't have enough time and I frantically struggled to be more efficient, to simply put the things I needed to do on a priorized list and start at the stop--the best strategy I ever found.  I got calmer about that toward the end of my teaching career, but never really blasé. (Apparently happy workers have just enough work to fill just enough time.  Never too much work and too little time.  Something needs to change, beginning with our ideas of productivity when we're supposed to be available 24/7.)


For three years now, I've had two- or three-week depressions in the middle of the summer.  I would sit on the bench in my backyard, studying the stillness of the day, and struggle to name or place this overwhelming mood.  There was nothing wrong.  Nothing I could fix that would create a ladder out of the abyss.  Then one day, just as I had shut down the computer and planned to move on to something else, Tuck climbed from the bookshelf down into my lap.

These two cats are among the most loving I've ever had.  Lyra is insistently affectionate but Tuck has quieter ways.  When I wake in the middle of the night, Lyra is likely to be on my pillow with his paw on my hand or his head tucked under my chin.  Tuck is likely to have wiggled his way under the covers and curled up next to my belly, where I've cradled him like a teddy bear.  When I'm working, Lyra will climb ecstatically into my lap, arrange himself like a babe in arms, purr loudly, and then take off after three minutes.  Tuck stays quietly for half an hour. So when he climbs into your lap, you stop what you are doing and simply enjoy him.  After about five minutes of petting, I just reached into the bookshelf and took out Pema Chödrön's When Things Fall Apart and began reading a chapter that didn't have any underlining in it.  I can't claim to be Buddhist, even informally, but When Things Fall Apart is a wise book and captures the long and wise tradition of Buddhism.

The chapter was called "Curiosity about Existence," and listed three truths of Buddhism. The first is impermanence, and you can imagine how she caught my attention when she wrote "Impermanence is bittersweet, like buying a new shirt and years later finding it as part of a quilt." All things change, and we are wise to accept that. The second is suffering.  Chödrön critiques the common myth that life will be full of lovers and parties and buying sprees: that's a pretty trivial idea of life.  "Pain and pleasure go together," she argues.  "Inspiration and wretchedness complement each other," she explains.  "With only inspiration, we become arrogant.  With only wretchedness, we lose our vision.  Feeling inspired cheers us up, makes us realize how vast and wonderful our world is.  Feeling wretched humbles us.  The gloriousness of our inspiration connects us with the sacredness of the world.  But when the tables are turned and we feel wretched, that softens us up.  It ripens our heart.  It becomes the ground for understanding others."  The third truth is egolessness, which I actually do quite well.  It's that state of curious observing and celebrating the world that has nothing to do with your identity or your desires.

We often suffer, Chödrön explained, because we don't accept life's impermanence.  Yes, I know, I'm supposed to be writing about light, but please be patient.  I won't stay in the Buddhist key forever.

I took the memory of Tuck's easy, sublime weight in my lap out to sit in the garden and think about impermanence and suffering.  I want summer to hold time still.  Some days it does, when the wind is down and you imagine you can hold the present moment in your open hand like a hummingbird. But I also realized that my summertime sadness is brought on because I occupy a contradiction.  I want summer to hold still, but I know at the same time it can't and that reminds me of my mortality.  Counter-intuitively, I feel frighteningly mortal during those still moments.  Next summer, I'll do what I usually do about intractable problems or difficult people:  I will cozy up to them and be curious. I think there's more to be understood about my blue weeks, but this will be a good place to begin. 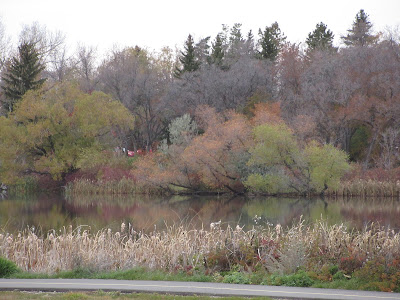 But in the meantime, fall has arrived, as I know by the light.  The light outside is different.  In spring and summer, you can almost look through a leaf to see the shadow of the one above it.  In fall, leaves get thicker, stiffer, and cast a thicker atmosphere into my heavily treed back yard. Trees have turned from the generic shade of summer green to their own shade for welcoming the colder days, so landscape is made of rich textures--browns, ochres, golds, grey-green, rusty reds, olive green. When I climb to the top of the creek bank, I simply stand and take in the wealth of a landscape that's more three-dimensional, the way humans take on complexities as they go through life.

It's darker in my kitchen, partly because of the crab apple tree outside my kitchen windows, partly because the sun has moved south.  I catch the light coming into the house differently, opening up corners I hadn't seen for a while.  The space I live in becomes three-dimensional in a new way. Sunshine even hits the chrome on my office chair and casts an arc of white light up my walls and across my ceiling. It's dusk when we eat dinner, so Bill has taken to lighting candles again--light arriving differently. 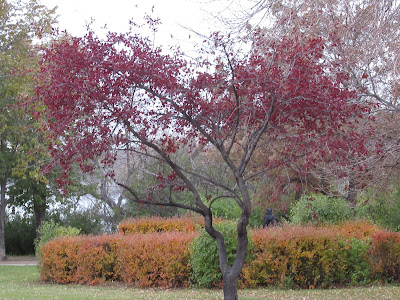 The light turns gold from something besides forest fires.  The sky becomes an almost improbable blue.  Trees are already turning gold, adding yet another kind of light.  In a few weeks, leaves will begin to fall leaving puddles of light beneath the trees, but also opening up the sky.  Intellectually, I know that fall simply marks the inevitability of winter, but I can't convince myself not to be gobsmacked by the beauty that's here right now. I'm welcoming impermanence in a way I don't during the summer. That's partly because fall has always been a second new year for me. As a student, and then a professor, fall always brought new adventures, new ideas, new people.  I celebrate change in a way I don't in the summer. Maybe on some level, this beauty is sublime, with mortality....? With mortality partnering with beauty in a way that makes impermanence inviting.