Hope: Learn It from the Bees 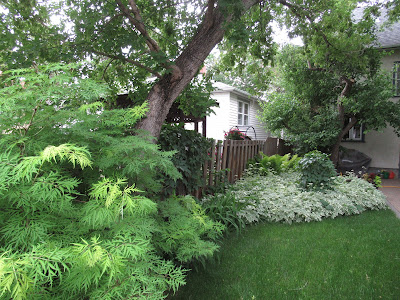 This morning I was down on my knees, weeding the vegetable garden so my tomatoes, beans, potatoes, cukes, lettuces, and herbs could get the best of the water and food in the soil.  And, to be frank, I love weeding.  I love the look of a garden after a good bout of weeding. I love this acknowledgement that I am merely nature's handmaiden.  After I've put in seeds and plants, I can add water and some fertilizer to my garden, but that's about the extent of my powers.  I can't take away too much water.  I can't do anything about unseasonably hot or cold days, except to see things are watered on the hot ones.  But I can weed.

While I was weeding among the tomatoes, I was buzzed by a couple of bees, reminding me of my last year of teaching.  I'd decided it was important to teach an English 110 class on literature and the environment. (English 110 is the second English class most of the students on campus are required to take.) I remembered telling them that if people disappeared, the earth would thrive.  But if the bugs disappeared, particularly the pollinators like bees, the human race would be toast.  So we're here courtesy of bees and their kindred.  Interestingly, when I read the final exams for that class I noticed that almost every student had found somewhere to include that fact and I remember being rather pleased that I may have shifted their sense that people are the centre of the universe.

It's humbling, isn't it?  Bugs. This humility runs through Jenna Butler's Revery:  A Year of Bees.  Jenna and her husband, Thomas Lock, live off the grid, just at the edge of the boreal forest in Alberta, where they farm and keep bees. The book begins with Jenna up in the wee morning hours on a cold January day to stoke their stove, light a wax taper, and daydream through seed catalogues.  Choosing what to grow in their vegetable and cutting gardens--choosing what will feed them literally and what beauty will feed their souls--has an impact on everything around them, particularly their bees' sister pollinators.  In this scene, two of her book's themes meet.  How we must bring humility into our relationship with the natural world, and how we are profoundly interconnected with it.  Everything we do resonates outward. 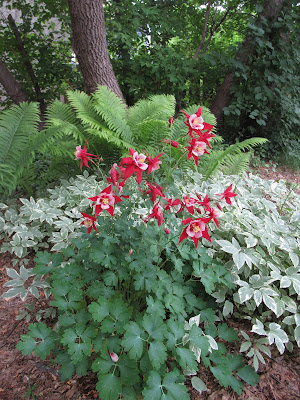 A garden, I tell myself when things aren't going as well among the flowers and shrubs and vegetables as I'd like, is always a work in progress.  Some things stay the same.  For years now I've had Asiatic lilies in my west perennial border.  But the weather has changed.  Last year was appallingly hot, and the lilies didn't flower.  This year it's been cool and rainy, so I think I'll get some blooms, but I'm not entirely sure yet.  When I visit the border, I look down into the Fibonacci swirl of leaves and ask if they're setting a bud.  Some of them are; others, I'm not sure about. As well, the enormous evergreen in my next door neighbour's yard has grown, so my lilies probably don't get enough sun.  There are too many variables!  Similarly, Jenna writes that "As students of the land, we can choose to learn through humility or hardship.  Humility can be a tough path at times.  It often means setting aside the things we dream of doing with the land until such time that we learn a way to make them possible without destroying ecosystems or compromising the many untouched acres of forest."

As Jenna thinks about seeds for the next summer, recognizing that she's just part of the landscape, she arrives at an ethics of husbandry that recognizes that we are interdependent, and that human beings are really only a small part of any ecosystem, a small part with outsized impacts: "One of the most powerful results of working with the land in a conscious way has been coming to see it as a series of interlinked ecosystems, and realizing that what we do to one ecosystem we effectively do to all" (22; emphasis mine).  Yes, she seeks to be careful what land she clears, what seeds she plants, but this involves some granular thinking. If they grow their garden into verges, for example, that will have an impact on the pollinators that have laboriously evolved to thrive on the plants that grow there.  Revery is full of facts about bees and bee-keeping.  Alberta is the fifth-largest producer of honey in the world, thanks in all likelihood to professional beekeepers who cart their bees around the province to fertilize canola.  But bumblebees are joined by 320 different species of bees, and not all of them are doing well.  So Jenna plants for her honeybees and for the others who are also busy fertilizing Alberta's varied ecosystems. 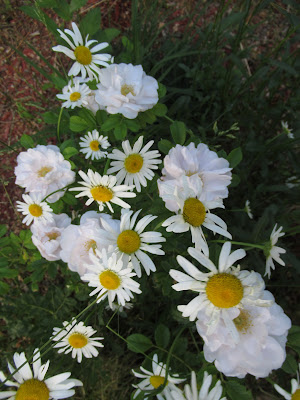 As well, she and Thomas are aware that their bee hives are complex; each kind of bee has its own task; the hive itself has its natural shape of a superorganism: "A superorganism is, at its core, a social unit that's carefully diversified when it comes to divisions of labour and works together as a whole" (24).  I try not to take my honey for granted, and I'm very careful to always buy Canadian honey.  In this sense, Revery is a gift to all of us, an insider's glimpse of how simple and yet complex hives are, particularly given how far north as their farm is, and how contemporary farming practices endanger them.  We learn about the coats the hives wear for about half the year and about how Jenna must order new queens from New Zealand when something hasn't gone quite right.  She and Thomas have two different ways of attending to their bees.  Jenna listens. And Thomas watches from what is apparently the best seat on the farm, one that calms and fascinates just about anyone who sits there.

These superorganisms to which they pay so much attention are natural synecdoches for the human relationship with the natural world, one that informs every decision Jenna and Thomas make on their farm.  If nature is fine, we'll be fine.  If nature is in trouble, we're in trouble--or will be soon. The ethics of husbandry that Jenna and Thomas practice acknowledges that when human beings work with the natural world, we are the beneficiaries.  As I've tried to show in my "Nature's Culture" poems, the complexity and generosity of nature can profoundly benefit us.  First, there's the sensual beauty they bring to our lives.  Jenna writes of harvesting the honey in late August:  "The scent of the kitchen on processing day is a smell as old as memory....The scent of it, and the taste of a stolen teaspoonful on the tongue, releases May's willow catkins and June's wild roses, July's white clover and August's goldenrod  It releases all the weather of a boreal summer in the faint tinge of forest fire smoke or the watery flavour of flooded blossoms" (89).

European monks are credited not only for their tasty honey mead, but for their recognition that honey is a reliable unguent.  The Egyptians buried their dead with pots of honey.  Manuka honey from Australia and New Zealand can heal skin trauma. An Austrian, Heinrich Huttner, recognized how much he benefitted from inhaling the warm air as he worked his hives, coming to believe it could cure the common cold.  He has opened a bee spa where patients can take afternoon naps among the breath of bees and the scent of honey, which helps with a number of breathing-related ailments.  Jenna herself has turned to the bees as a way of understanding and mending her life-long relationship to pain. 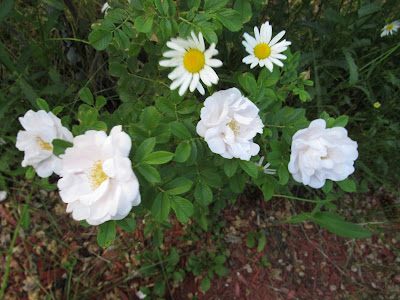 I've been working on this post for a while.  The vegetable garden is going to need weeding again soon, but right now I am encountering bees in my roses, where they seem to dance in the middle of the flowers.  Whenever I hem and haw about whether we should water the flowers and vegetables again today, I think of Bill saying something so wise and so grounded in his own experience.  He loves watering, especially after a tough day at work.  "Watering our garden," he reminds me "is an investment in our mental health."  It gives us beauty and food, two essentials for our well-being. And because tomorrow morning I'll be heading out to the roses again or watering the pole beans, it gives us hope.