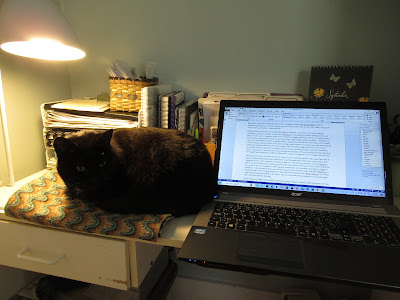 Bill's 27 months working from home during the pandemic only reinforced James's belief.  There were practical things we did to make the claustrophobic days as pleasant as could be.  I would put out a plate of fresh vegetables at lunch on a lovely glass dish given to me by Jeanne Shami.  I would scour "Reasons to Be Cheerful" and "Future Crunch" for good news.  I spent time cooking things I'd never tried before because time was mostly what I had. At dinner there were candles. But what I began to notice was how careful we both were, how patient we were and how patiently we listened to one another.  I noticed how deliberate our generosity and our gratitude were.  One day I summed it up by saying "Kindness lives here."  We stopped and looked carefully at one another.  Yes, that about summed it up.

I didn't know that was going to tip me into a philosophical quandary.  What's the difference between kindness and goodness?  Why do we have two words that live in different houses but are so friendly?  Kindness can come into those everyday "micro-connections" that researchers are telling us are so important to our baseline well-being. I've witnessed some dispiriting moments when customers treated a barista or a grocery store clerk as if they were badly-programmed robots: the customer had completely forgotten the human connection.  So I'm really deliberate about telling someone who is harried by three customers before she or he gets to me "That's okay.  I'm not the only one who needs your attention."  Or I ask about what they're studying in university this fall.  I hold the door for a woman pushing her husband in a large wheelchair. Or I leave a crazy tip because I don't know how the barista's pandemic has been, and we're not out of the woods yet.  That's not goodness. And it borders on goody-two-shoes virtue signaling. But it's the only way I can think of to change the world. If just one of those people I've connected with or helped stands up a little straighter or settles the tension out of of their shoulders or smiles at someone else, I've done my job.

But kindness isn't hard.  It doesn't require me to make judgments or weigh options the way goodness does.  Rutger Bregman, whose Humankind I cannot recommend highly enough, finds that most people are pretty decent.  Given my experience, I believe him. So I'm not making any judgments about whether the seventy-five-year-old woman is really patient with her husband, in spite of the fact that he requires a lot of care and she has less and less energy every day and her feet hurt.  I'm not wondering whether the traffic jam in the coffee bar is the result of the barista's incompetence. The manager will sort that out. I'm just assuming everyone deserves kindness, and although the Buddhists tell me that is true, that feels a little lazy to someone coming from a western philosophical tradition.

But here's the thing.  The only cases where I can see that kindness and goodness aren't sharing a lot of space on their Venn diagram is when the good thing to do is to call someone else out, insist that they be accountable or take responsibility for their actions. At its most dramatic, I can say that principle of goodness requires us to resist evil or injustice.  Yet those who attacked the U.S. Capitol or the Truckers who settled down in Ottawa thought they were resisting injustice.  Maybe kindness has something to teach our assumptions that we're being good.

The kindness/goodness quandary is particularly hard for me when I see someone struggling to grow and not behaving very well in the process. I overthink whether or not I should call them out, and I'll admit I often decide not to. Which of us isn't striving to grow into a better person?  On whose schedule? At the same time, I'm such a wimp! Often I think the behaviour needs to be named but not necessarily judged.  If they're stuck or lazy, though, kindness be damned:  a little reality check is called for. But the last question I ask myself before I deliver my edict is whether my focus on goodness is at least informed by kindness.  After all, helping someone to grow or see themselves more clearly is kind as well as good.

Or do I just want to be right!  Do I just need to blow my top because the last four days have been cloudy and my writing is not going well and the construction taking place on the street outside my window is driving me crazy with the constant "beep beep beep"? Am I depressed?  Did I get up on the wrong side of my bed? If I answer "yes" to any of those questions, my temper tantrum is called off. It has taken me a long time to get to this practice, to see that my judgments often have as much to do with my mood as with someone else's behaviour.  But, bit by bit, I'm getting better at it.  The ethics of depression, if we can speak of such a thing, force you to find the real source of your unhappiness and anger.

So maybe asking that seemingly innocent questions, "Is this kind?" has more relevance to goodness than I'd thought when I started to write.

(I was also thinking about kindness and love--whether they're really different--but that's for another day.)